This morning I began my day reading Jane Yolen’s poem Moving Through the Farmers’ Fair ©.  A lovely line from her first stanza spoke to me, so I borrowed it for my title. As I was reading, writing, and waiting for my coffee to brew, Mark Breen, our VPR weatherman, declared today would inch into heat more fitting for early August than September. The morning yet in foggy chill, my fresh cuppa finally in hand, I filled with dread.

I am done with heat. I am done with days where humidity and the added warmth of school-packed bodies make me drip in my professional clothes. Early September is always hot, yet every year it catches me by surprise.

Septembers baked in Oregon, where long-sleeved school clothes and Buster Browns, so new and tempting, comfortable on the leafy walk to Meriwether Lewis Elementary, became sweatboxes by afternoon, quickly discarded…abandoned until October.

Septembers sweltered in Texas, in the wrong-side-of-the-tracks school of my early teaching days. 100 plus degrees and nearly 100 percent humidity. No air-conditioning. The first school days started and ended thirty minutes early to beat the worst of the heat. A psychological token really. My west-coast conditioned body wilted well before noon, when I passed out ice-cubes to listless children, the clock ticking so slowly toward dismissal.

Even in New England, the home of quintessential fall: strings of crisp, colorful days, rarely marred by rain; late summer flexes its muscle, the aging prizefighter against up-comer fall.

What I have heard some Vermonter’s call “Judas trees” betray the calendar. “An early Fall!” these flamboyant trees exclaim, red outliers amidst their neighbor’s still summer green. I have learned not to listen. Humid afternoons do begin to relax into cooler nights and pleasanter sleep. But misty mornings birth false hope as temperatures inexorably chug once more into sweaty discomfort. 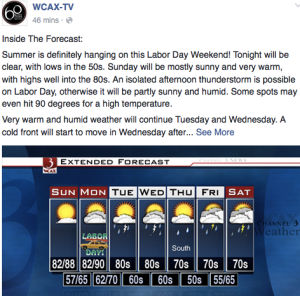 Somehow I forget this each year: Summer’s tenacity. I forget how it holds on so fiercely, ticking out its final minutes, just before the alarm, and we wake into fall.

Change is hard. It is not easy to let go. Not for seasons. Not for us. Recent headlines in the news, photographs that rip hearts in two, confirm this. We cling to outdated social definitions, to laws and practices that no longer make sense, to what feels comfortable, even when the climate of our lives, our world has changed. We have such a hard time opening to new ideas, new ways of seeing, to new seasons in our lives. We find ways to ignore the what we choose not to see, but no matter how hard we hold on, time ticks on.

In late July I adopted a frightened small mule from a rescue. Given time, consistency and attention, Gus has been making great progress in trust. He will now stand and let me brush him, something he was too terrified to tolerate at first. The rescue I

adopted him from asked me to share some pictures. I sent some, along with some bits of video. After they posted a clip on their site, a commenter said, “It takes a grandmothery type.” After my initial shock from the fact the comment was in reference to me (though likely meant in the kindest sense) I realized, no matter how I feel on the inside, my life has shifted seasons. I am now entering the fall season of my life.  Perhaps, If I embrace my inner grandmother, I can savor and be fully present in this part of my journey, before my winter comes.

giving up apples. The corgis are slow to respond our calls as they snarfle the bank for prized windfalls. They finally trot in, a jaunty parade of four, green apples jawed like tennis balls, then head to their beds to enjoy their treat. I will soon climb the stairs to my own bed this warmish night, I will drape my favorite fall sweater over the chair. Ready. Ready for the tick of the clock year. Ready for change.

One thought on ““A Tick of the Year Clock””

Bringing Wild Horses to the World

Design Of The Picture Book

Sub It Club
Reflections on the Teche